Thoughts of the day...

I'm still in the enviable position of having plenty of writing time at the moment. I know it's enviable because I told a writer-friend how much I'm getting done at the moment, and his face turned green and he tried to scratch my eyes out, right there on the pavement, in front of the library. The ensuing injuries explain why I haven't had much time to update this blog lately.... sorry.

This week I have mostly been watching (on ghetto Sky+, also known as "Freeview Plus"; apparently kids these days call that "Pov TV", Pov being short for Povvo or Poverty rather than point of view), a show called In Their Own Words: British Novelists of the 20th Century. This is a series currently being shown on BBC4, about writers of the 20th century. It uses archive footage of interviews with the authors themselves, so you get an eclectic mix of writers from Barbara Cartland to Christopher Isherwood and from Jean Rhys to Robert Graves talking about their own work.

It's a fascinating show, partly in terms of the revelations about attitudes of the times in which writers lived (you see Evelyn Waugh being interviewed by a female journalist in the 60s, find out that he only agreed to do the interview on the specification that he was interviewed by 'a pretty gel', and that off-camera he asked the production crew "When is she going to take her clothes off?") but also about the writers themselves. There's much encouragement to be had in the knowledge that even EM Forster suffered from the writer's gremlin. Even after writing some of the finest novels of the early 20th century, books which were critically acclaimed and massively popular at the time, he didn't consider himself to be a great writer. Of his own capabilities, he said: "I don't consider myself to be a great writer because I have only really managed to get down onto paper 3 types of people: the person I think I am, the people who irritate me, and the people I would like to be. When you get to the really great people, like Tolstoy, you'll find they can get hold of all types." It speaks volumes that even a great writer like EM Forster had crippling doubts about his own self-worth.

So I really recommend this series, even if just for the fact you get to find out Top Facts like that Robert Graves mainly wrote I, Claudius to pay off his mortgage.

One Big Damn Puzzler John Harding
The Language of Others Clare Morrall
Blankets Craig Thompson
Shortcomings Adrian Tomine (FIVE BLOODY STARS, although come on Adrian, stop being such a bastard to your girlfriend).
Posted by S J Bradley at 06:55 No comments:

Email ThisBlogThis!Share to TwitterShare to FacebookShare to Pinterest
Labels: EM Forster, I Claudius, In Their Own Words: British Novelists of the 20th century, Robert Graves, writing routine, writing time

Too busy to update properly

Sorry, readers. I'm too busy to update properly at the moment. More soon.
Posted by S J Bradley at 07:51 No comments:

Have you got a story to tell? 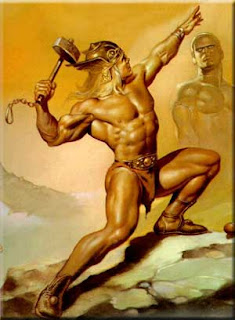 As part of the first ever National Short Story Week in November, I'm in the process of organising an event that celebrates the short-story teller in all of us. After all, there's nothing the British pub-going public like better than a good old yarn, right?!

This event is loosely themed for "Myths and Legends". (Hence the picture of Thor). But you take this theme as lightly as you like: there's no need to get all studied up on Norse mythology before you come, or to know the name of every single Roman God. You will not be thrown out bodily if your story is not to do with ancient myths. Your story could be to do with a myth from your school-days, a living legend you've met, a legend or myth you yourself have created... the theme is really yours to riff off as you like.

Additional musical accompaniment will be provided.

In addition, (although this, also, is not compulsory), you are welcome to dress up as your favourite myth or legend. Whether you're going for Artemis The Hunter or Peter Beardsley, all costumes will be judged as equal, except for when it comes to prize giving at the end of the night when the winner of the costume competition is revealed.

If you've got a story to tell and you'd like to speak at this event, share it! Please get in touch with me at s dot j dot bradley [at] hotmail DOT com.

You can join the facebook event for "Have you got a story to tell?" here.
Posted by S J Bradley at 09:23 No comments: