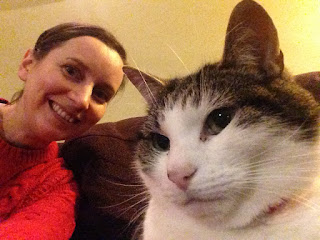 Writing is a funny business. You've got to be a bit odd to want to be an author in the first place: all those hours spent in a room by yourself, making stuff up, and rarely, if ever, getting paid for it. Those of us who choose to do it either have a bit of a personality defect, or an awful lot of things they want to say, or in my case, a bit of both.

Every writer has good years and crap years. I've been on the receiving end of plenty of crap and terrible years myself, but this year... this year has been ace.

I began the year teaching some wonderful students in a Comma Short Story Course at Carriageworks Theatre, Leeds.

It was such a joy to teach these students and to think deeply about the short story craft. The students also produced an anthology. Tyto Alba: Short Stories by New Leeds Writers (which I edited) is now available as an e-book on Amazon, here.

It seems like ages ago now, but one of my hugest highlights of this year was the Saboteur Awards in May this year.

Putting the anthology Remembering Oluwale was one of my highlights of last year. The project was such a fulfilling one, one which took months of work, and although I was incredibly proud of the book, it was hard to know whether other people liked it too. Anyway, it turns out they did, and we won a Saboteur Award for it.

Here's a pic of me and Max Farrar from Remember Oluwale getting a bit giggly at the Awards bash after our win (sorry for picture quality; we'd all had a few boozes by that point.)


However, there are always losses to temper the winnings, as I found out when I handed Max the big bottle of gin we'd won as part of the prize, and he went on a lengthy bar crawl, and left it in a pub.

We never did get to drink that gin.

On the other hand, I did get to keep the trophy.

Sadly, this was also the weekend in which the notebook in which I'd written most of the working notes for Guest was pickpocketed out of my bag on the Tube. Farewell, little red notebook, I will never forget you.

During 2017, I was writer in residence at Leeds East Academy in Seacroft, Leeds. Teaching creative writing to the students there was one of the most rewarding things I've ever done. In September this year, they launched their anthology at Chapel FM in Leeds.

I'd watched these students go from being frightened little mice to being fierce lions, and it was an honour to watch them reading fearlessly in the beautiful upstairs space in Chapel FM.

Can I say it? This year's festival was a belter. A full day of short story goodness for £20 (you can't even get a long-distance train ticket for that these days) with workshops from Zoe Lambert, Sarah Dobbs, AJ Ashworth, and the mighty mighty Jacob Ross, winner of the Jhalak Prize.


What a treat it was to hear Leone Ross read from her newly-launched collection, Come Let Us Sing Anyway, in conversation with Peepal Tree Press editor Jeremy Poynting. Talk about having the crowd eat out of her hand!

As ever, our audience came from far and wide for this festival. We hosted our first ever Flash Fiction Slam (a huge success, by the way) at which the judges crowned Phil Olsen a very deserving winner. Here's a photo of judge & compere Jimmy Andrex whipping up the crowd.


Second novel, Guest, was launched
Phew, as if going to London, teaching for First Story, and organising a short story festival wasn't enough, this was also the year I launched my second novel, Guest.


It's always weird, after months or years working on a piece of fiction (Guest took about 2 and a half years to write), to see it finally come out into the world. You never quite know what people are going to think or how it's going to be received.

Anyway, it turns out people quite liked it. The Morning Star called it "a tightly honed work of dirty realism with convincing characters and richly developed settings, Guest is an entertaining and life-affirming work with important things to say about protest, [and] resilience", and Disclaimer Magazine called it "a journey told in clear, well-chosen prose [...] [with] characters both naturalistic and recognisable." It made it into The Morning Star's Books of the Year.

I was fortunate enough to be invited to do a number of events to support the book, in Bradford, Leeds (twice), Bolton, Manchester, and even in London! Many thanks if you invited me somewhere or hosted me anywhere. This event in Housman's Bookstore in London was a particular highlight. Thanks to Kit Caless of Influx Press for playing host.

Guest is still available from Dead Ink Books.
Comma Press & Verse Matters publications
I was really chuffed to have a number of short story publications this year. Comma Press invited me to contribute to their Conradology anthology, which is a collection of stories and essays responding to the work of Joseph Conrad. My story, Fractional Distillation, responds to the themes of colonialisation threaded throughout Conrad's work, particularly Heart of Darkness.
You can purchase Conradology from the Comma Press website here, and why not treat yourself to one of the many other fine anthologies and collections they have, while you're there?


There's also the Verse Matters anthology, edited by Rachel Bowers and Helen Mort, which "harnesses the power of everyday stories, highlighting the strength and inspiration that comes from speaking out proudly in unsettled times." My story Weak Heart is in there, along with new writing from Malika Booker, Liz Berry and Hollie McNish, among others, and is available from the Valley Press website here.

To use a hackneyed aphorism, winning a K Blundell Trust award in December this year was the cherry on top of a particularly cakey year. On Thursday I arrived home from work to find a letter waiting from the Society of Authors. I never get exciting post like that, and I wasn't sure what it was.
Turns out it was a letter telling me that I've won a K Blundell Trust Award, to support me to research and write my third novel, The Everything Company.
It couldn't be real, I said to myself, as I looked around the kitchen for a hidden camera. (My kitchen, by the way, is where I open most of my post. I find it very well suited to the task, in case the post makes you suddenly need to make a calming cup of tea.) This must have been the tenth or twelvth or maybe twentieth award I've applied for over the course of the past five years or so, and I never win grants or awards, I said to myself, so surely this must be a mistake, or perhaps I am suffering from some kind of Grants or Awards Non-Winning Mirage, such as the type a thirsty man might suffer when crossing a desert.
So then I read the letter again, and then I rang my publisher Nathan, and talking to him convinced me that perhaps it wasn't a prank after all, that I really had won a Society of Authors Award, and later on it popped up on The Bookseller website, which means it must be true.
The Award will be of huge help to me, since it will allow me to take a bit of time away from my day job to concentrate on writing the next book, and honestly, I can't wait to get stuck in.

Another thing I want to say
At the end of this very long blog post, what I want to say is that this year has been a real bowl of fancy chocolates for me; it's been truffle after truffle, maybe the odd praline or marzipan-coated treat, and not a single coffee-flavoured liquer among them (well, maybe one - that time when my notebook got pickpocketed on the Tube.)
I also want to say that not every year I've had as an author has been like this one. Some years have been real stinkers. I've had years when nobody wanted to publish anything I wrote, when I got rejection letter after rejection letter; years when supposedly reputable editors have tried to rip me off, I've had stretches lasting months and years where I've had nothing but rejection or often lengthy haunting silences and no rejection letters at all, and times when I've been invited to give readings and I've gone along and literally nobody's turned up.

There was a period of years when I've wondered why I bother continuing trying to write when a. nobody wants to read my writing, or b. nobody likes my stuff anyway apart from me, so maybe it's me that has the problem? or maybe c. the odds of success are so low and there are so many writers out there better than me, so why bother?

All of this makes it all the more sweeter when I've finally had a great year, a year like the one I've just had.

Anyway it turns out that if you keep going, keep on reading, writing, working, meeting deadlines, and being kind and supportive to other people, and accepting other people's help, eventually you might be lucky enough have a year like mine.