Fictions of Every Kind 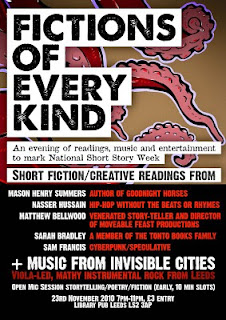 November: season of fireworks, dark nights, writing in dark garret rooms wearing fingerless gloves, and of large swathes of people attempting to write a novel in a month. Interesting fact: writing Inception took Christopher Nolan 10 years, while Stephanie Meyer wrote Twilight in a matter of 2 months. You can make of that what you will, because I am in no way casting aspersions about the sustained hard work and detailed attention that ought to go into writing a worthwhile novel.

November also brings us the first ever Fictions Of Every Kind night. The inaugural FOEK aims to celebrate national short story week, and it will do it with a wide range of interesting performers - with readings from folk story-teller Matt Bellwood, to hip-hop poetry with Nasser Hussein; cyber-punk and speculative work from Sam Francis, cutting-edge dark science-fiction from Mason Henry Summers, and fiction from me too. Readers, I haven't read aloud to an assembled audience since that unfortunate incident at primary school, and I don't mind telling you I'm a bit scared.

In addition, there's music from the very wonderful Invisible Cities, and an open mic story-telling session at the beginning of the night.

"Where is all this happening?" I hear you cry. "I'm champing at the bit to go to there!"

Well first of all hold your horses, because its not until the 23rd of November. Its at The Library Pub in Leeds, it starts at 7pm, and its £3 in (all this information is on the flier above if you squint your eyes hard enough.)

Hopefully these kinds of shenanigans will become a regular event, but until then you'll just have to content yourself with this one, dear readers. Hope to see you there.
Posted by S J Bradley at 05:07 No comments: 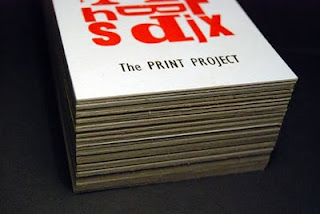 Letterpress. I loves me a good letterpress: it makes me go weak at the knees. In letter press, metal plates are used to impress text and ink deep into card. Every single page in letterpress needs to be made by an actual human being, operating several tons of weighty machinery. It's beautiful and it's unique and it doesn't get used very often any more, so three cheers for The Print Project in Bradford who are working hard to resurrect it.

This project is based at the 1 in 12 club in Bradford. The art of letterpress is centuries old, and this lot, Fred Dibnah-style, are doing what they can to keep the skills and expertise necessary to run one alive. With the increasing development of other methods of printing which are cheaper and more convenient, the art of letterpress - which produces something very beautiful and memorable - could be in danger of dying out.

Unlike items lazer-printed or photocopied, the marvellous thing about letterpress is its texture. In picking up a letter-pressed item you can feel, in your very hands, the sweat and skill that has gone into making it. A letter-pressed booklet or flier feels a little weightier in your hands, and with the text sunk and pressed into the card, you can actually feel the texture of the words you're reading with your fingers. (fact fans, this is very much not the sort of thing you can get from an app on your iPhone.... I'm just sayin'.)

At present The Print Project can produce leaflets, stationery, CD packaging, booklets and leaflets, but welcome contacts to discuss other commissions. If you're interested in letterpress, or even if you just have a bit of a 'thing' for different printing techniques, it's well worth a look.

The Print Project's blog
Print Project on Facebook
Posted by S J Bradley at 04:53 No comments:

Things that go by the wayside for writers

There are lots of things that writers are good at. Sitting still for long periods of time with only their own thoughts in their head for company. Inventing whole new worlds. Making pretend people come to life. Making a reader see a picture in their mind using only a collection of well-chosen words. Typing. Procrastinating. There are all sorts of things at which writers do regularly, and at which only a writer can excel.

But... there are also many things that writers are bad at. When you're busy trying to write novels / stories / terrible pulpy romance novels, there are so many things that necessarily have to go by the wayside. So few of us can make a living from our art that we instead spend our free time holed up in a semi-darkened room with only a laptop, a notebook, and a mug of tea for company: friends, what effect does that have on us? What, in other words, do we 'miss'?

Socialising. My friends still wonder why I glance around shiftily and make excuses when they invite me out. People never understand when you tell them, "I've got to write". "WRITE SCHMITE!" they shout. "YOU CAN ALWAYS WRITE TOMORROW BUT THIS INVITE TO COCKTAILS IS A ONE-TIME ONLY OFFER." Not that it matters, even if you do go out, because the next thing that goes by the wayside in the writer's life is...

Having normal things to talk about. People at work always want to talk about last night's telly, and I DIDN'T SEE ANY OF IT, because I was TRYING TO WRITE A NOVEL. But you can't tell people at work you were writing a novel: they won't understand, and anyway it only makes you look like a pretentious wanker. So instead you tell them, "Oh no, I must have missed it, I was painting the bathroom." And then your workmates think you are weird because you, apparently, have spent every evening for the past 3 years painting the bathroom. "How big is her bathroom?" they must think. "Does this woman live in the Golden Gate Bridge?"

Having normal social skills. You spend your evenings missing conversational telly, and having conversations with imaginary people who, by the way, most definitely did not exist until you made them up. It makes you a bit twitchy when people talk. For one thing, you find yourself mentally editing everything they say; and for another, you start obsessing over whether their character really would say that sort of thing, or is she just saying it to drive the plot forward at the expense of realistic characterisation? Viewing every human interaction as an extension of your plot quandary starts to make you look a bit strange. If you didn't already look strange enough.

In Pursuit Of The English Doris Lessing
The Complete Maus Art Spiegelman
Twilight Stephenie Meyer (my friend lent me it, and I didn't want to be rude)
Soho Keith Waterhouse
Posted by S J Bradley at 10:29 No comments:

Friends, who among you has never bought a copy of her own book from Amazon?

Come on, you've all done it at least once. Don't make me feel like a pariah here.

A couple of weeks ago - over a year since first receiving the good news that my words were to appear in print (IN PRINT) in a book that people could BUY - in a book shop - my words finally were printed, and the book that they were in came out, and a copy of it was brought to my door by the postman.

Well, I say one copy. It would be more accurate to say 'a dozen copies', since that's how many author-copies I insisted on the publisher sending. (Thanks, Stu). Because it's never too early to start buying Christmas presents, right?!!

No. I am not going to start giving people a copy of my own book for Christmas presents. What am I, David Hasselhoff? No, the idea was to send them out to anybody who has supported me in the long and torturous road to getting published. Its a road that's taken in a lot of perseverance, a lot of wailing and gnashing of teeth, lots of blank glassy stares and going red in the face from frustration, and many many tears. The nature of 'help' my long-suffering pals and boyfriend have given me is wide-ranging. It encompasses not complaining too loudly when I take up the entire kitchen table with my notebooks and bits of paper; it includes silently bringing cups of tea when I'm in the midst of a midden. It includes friendly chats and afternoons spent companion-writing around a friend's house. It includes not laughing at things I've written, even the attempts that were very rubbish. On the part of the long-suffering boyfriend, support has included not only putting up with long periods of black, moody silence, lots of shouting and stomping around the house, wiping my face on the cat and crying, but also building me a desk and long-term lending me a laptop to work on.

So there were plenty of people to thank, and I wanted to send each one of them a copy. But guess what? Nobody wanted to be given one. Readers, the support of my nearest and dearest was so extensive that they wouldn't hear of being gifted with a copy of the book; they all insisted on buying one. To this very day, I still have a dozen copies of Even More Tonto Short Stories on my coffee table at home.

The book is also available on Amazon. So I had all these copies on my table, and then allegedly according to the Internet, you could buy it off Amazon. I almost couldn't quite believe it. I wanted to check that it worked. And so, one day (and I am pretty embarrassed to admit it), I bought a copy of my own book.

Unconvinced that there was a book publicly available with my words in it, I clicked "buy", and remained mildly cynical until the day when the postman came to the door with it in his hands. (Friends, don't try this it at home. It probably technically counts as 'shilling'.) Thinking that the whole thing might be a product of my fevered imagination (apparently a necessary trait for authors), I tore the cardboard wrapping off with shaking fingers: and there it was underneath, a thirteenth copy of Even More Tonto Short Stories, to go with the other dozen I still have sitting on the table in my living room....
Posted by S J Bradley at 06:19 No comments:

Email ThisBlogThis!Share to TwitterShare to FacebookShare to Pinterest
Labels: buying your own book on amazon, even more tonto short stories, getting a book published, getting published
Newer Posts Older Posts Home
Subscribe to: Posts (Atom)