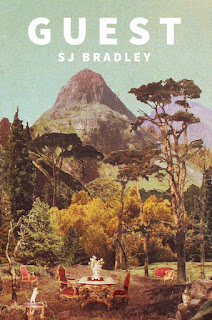 Sarah will read from and discuss her book before taking audience questions and signing copies of the novel.

SJ Bradley is an award winning short story writer, novelist of Brick Mother and founder of Leeds based Fictions of Every Kind.

Tickets are free but places must be reserved in advance. To reserve your place please email leeds@waterstones.com, ring 0113 244 4588 or tweet @WStonesLeeds. More information: https://www.waterstones.com/events/book-launch-guest-by-sj-bradley/leeds

The Facebook events page for this event is here (many thanks to Leeds Big Bookend for their support in organising and publicising this!)

Stronger Than Skin Stephen May 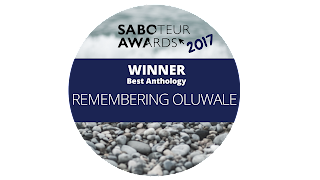 So, so chuffed to have won Best Anthology for Remembering Oluwale in this year's Saboteur Awards.

When we got the news we'd been shortlisted, I did a fair bit of umming and aahing about whether it was worth going to London for the ceremony. "It's an awful long way to go," I mumbled to one person. "The trains are so expensive." I made various other typical chippy Northern comments like, "What do I want with going to London anyway? I've already been to London once already this year, isn't that enough?" and "Northern writers never win things anyway, so what would be the point?"

A short chat with Jenna Isherwood, one of my co-organisers from Fictions, changed my mind. "It's not often you get invited to an awards ceremony," she, or I, I can't remember, said. "It'd be a shame to miss it." Plus, Max of Remembering Oluwale had already bought his tickets, so that was it - my mind was made up. 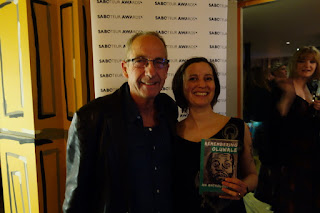 (Me and Max arriving at the ceremony: fresh-faced and not booze-faced... yet.)

Our category was called second, which thankfully didn't give us too much time to get nervous.

Here's my speech, as best as I can remember it:

"Ours is not the first book about David Oluwale, nor are these the first writers to write about him. Writers like Linton Kwesi Johnson, Caryl Phillips, Rommi Smith, Ian Duhig, Kester Aspden, and Zodwa Nyoni, among others, all have written about him before.

If you don't know about David Oluwale's story: David Oluwale was a Nigerian man who came to Britain legally in the 60s, at a time when Britain was encouraging people from Commonwealth countries to come here to work. He spent most of his time in Leeds either in a psychiatric hospital, or homeless and sleeping rough on the streets. He was victimised by the police and eventually found dead, floating in the river Aire. When he died, the only records that remained of him were his hospital notes and his arrest records. He might have been forgotten altogether were it not for the work of the Remembering Oluwale charity, and the famous piece of graffiti in Chapeltown in Leeds which reads 'Remember Oluwale'.

At a time of closing borders, of low levels of empathy for asylum seekers, refugees and EU nationals, at a time of rising racism and jingoism, we need David Oluwale's story now more than ever. 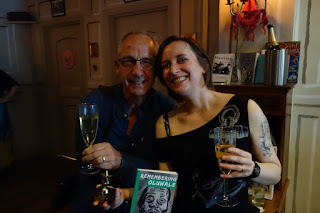 We'll be throwing a party in Leeds to celebrate Oluwale winning at the Saboteurs. It will be at Outlaws Yacht Club on Wednesday June 7th at 7.15pm with readings and cocktails. It's an open invite to anybody who wants to come and is free - do please come and join us.