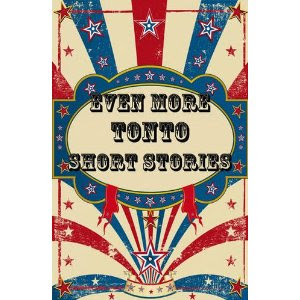 Here is a book called Even More Tonto Short Stories. It features one of my very own short stories, and it comes out on August the 5th. It features not only stories from new writers, but more established ones too. You can buy it off Tonto Books, or you can buy it from Amazon.

As you can imagine, this is very exciting news not just for me, but also for my long-suffering boyfriend who I would like to thank for all his patience and help (like that time when he built me a writing desk in the corner of our living room, using just pieces of wood and his BARE HANDS, and I never used it very much, but did long-suffering boyfriend complain? No he did not. No, I don't know why he puts up with it either). Also I would like to thank Pig Destroyer who likes to 'help' with the typing sometim55555555555555es. 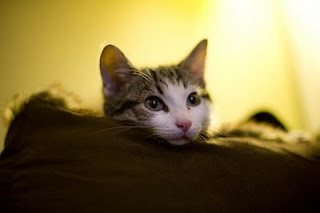 Every writer knows the transformative power of books, right? They change the way we see things, open our eyes to others' experiences, and take us away from our own lives. In a spectacularly enlightened move, the state of Texas has also recognised the rehabilitative powers of literature: it is sentencing (GEDDIT?!!) offenders on reading courses, instead of throwing them in prison. The programme is called Changing Lives Through Literature and has reduced reoffending rates from 42% to 19%. Rather predictably, the programme does come in for some stick, but many of those who have attended the programme say it has quite literally changed their lives.

Elsewhere on the internet, Le Rejectionist is running a one-year anniversary uncontest on the theme of What Form Rejection means to me. Fellow bloggers are invited to blog on this topic this Friday, then post a link to their post in Le Rejectionists' comments box. Five specially selected winners will be awarded a mix CD made by Le Rejectionist herself...!

Elsewhere, in real life news: I have a cat to feed, a greenhouse to water, a curry to spice, six Sky+'d episodes of Project Runway to watch, and a novel to write.

Get your pen and your tarpaulin: this patch of grass is now your office

The urge to write can bite any time, like a blood-hungry midge wreaking itchy havoc on a set of campers. For your average writer in the street there's nothing worse than being struck with an idea, and being desperate to realize it - but not having the time or paper to write it down. It's the curse that strikes all writers on a more or less weekly basis. It's part of the reason why all writers pockets are full of scraps of paper, scribbled-upon napkins, bus tickets crammed with microscopic writing, and notebooks. You never know when the ideas are going to hit you: that's the devil of it.

Just like that, the desperation to realize an idea can catch us scribbling away in the strangest of places. Anywhere that has room enough for a notebook and pen becomes the writer's office. I admit, I've done it myself, on occasions where that idea just couldn't float around my head a second longer...

On a train. We're not talking 40's style romanticism here. I was heading away for a rowdy weekend of karaoke and booze-facedness that absolutely wasn't conducive to the Big Project I was planning. Consequence: rattling along with my pen in my hand and the smell of catering-car Croque Monsieur in my nose, making strange marks on the page every time the car jumbled over "the wrong sort of leaves" on the track.

Sitting on a wall outside a community centre, in Hastings. Long-suffering boyfriend enticed me into coming away on one of his working trips. He thought I was going to make myself useful: I thought I was going to work on my novel. About halfway through the day, realizing I was holding his flash stand in a sulky and entirely unsatisfactory manner, LSB snapped: "You're no use at all! Go and get on with your writing and stop making my life a misery!" Result! With no way of getting to a lovely warm coffee shop, I instead plonked myself on the nearest wall, pulled my fleece warm around me, and got to work.

Under a tree. I'd read somewhere that CS Lewis used to do this, and so I thought if I did it it would be well literary. However, instead of producing a series of seven children's books that have endured through the ages, I got grass on my skirt and bird poo on my head. It didn't really work out the way I'd hoped.

I know I cannot be the only one parking my office wherever inspiration strikes....
Posted by S J Bradley at 07:57 No comments: 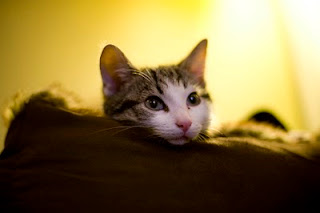 Good post over on Le Rejectionist about how authors' cats impede the creative process. They are, after all, not interested in whether you get listed for The Booker Prize, or whether your work will end up on future 'A' Level Syllabuses (Syllabi?). All your cat is interested in is where the next can of tuna is coming from.

The Long Firm Jake Arnott
Posted by S J Bradley at 04:17 No comments: