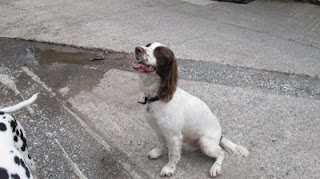 Here is a picture of a nice dog I saw yesterday whilst on a print-related adventure.

Yesterday, I went to a strange place - a letterpress graveyard, if you will - with my letterpress conspirator, Nick. He had his eye on a proofing press, and I wanted to perv over many different kinds of type.

At the moment, I'm working on several letter-press projects. One is a collection of micro-stories for an exhibition themed 'Next to Nothing'. I'll letterpress print the stories and show them in the exhibition, which is going to be in a disused shop unit in Leeds later on in the year. There will be three stories, and my aim is to print each using a different typeface... so I needed to get my mucky little paws on some more of those lovely letters!

The chap who runs the strange place used to work with computers, and has gradually moved, bit by bit, into the world of antiquary. While we were there, he mentioned in passing that he would never go back to working back with new technology again. The mainstay of his business is in repairing and moving printing presses, but incidental to that has a massive collection of trays of type, printing press spare parts, and everything that goes along with it. Cases reached from floor to ceiling, each full with type trays. There were lots of rare typefaces, in all shapes and sizes, and I spent a pleasant hour standing on chairs and climbing over printing presses to look at them. I came away with two trays of an 20s style art-deco typeface which so rare it isn't in any of the books. (This is what I'll be using to print one of the stories).

In addition, the guy was looking after two of his friends' dogs and they were both running around the yard, yapping and getting excited. Here's a picture of them in action. 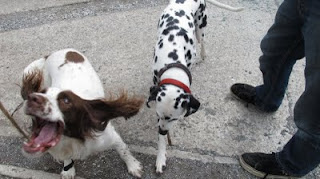