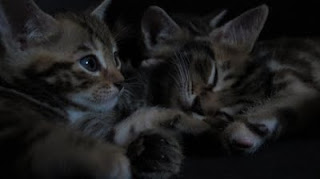 Recently, I've had a couple of strange conversations about how much I make from my work as a writer. Having these sorts of conversations always reminds me of that David Sedaris joke: at parties, when people find out what he does for a living, people ask: "You're a writer? You've written a book? Oh, I might write a book. How much do you get paid?" The joke isn't always obvious to non-writers. They don't see how many hours of toil go into working on a novel, nor how little money you'll ever see back from those hours. Very few writers make money, and there are lots of great writers who worked their whole lives, leaving behind works of massive importance, who never made any more than the minimum wage.

Commercial success isn't necessarily a great thing to aim for. The problem with writing for money, as the saying goes, is that you'll have to write for money. But if you remove the burden of having to generate profit through your writing, you can devote yourself to writing whatever you like. That doesn't mean you dash off whatever crap comes into your head, and never push yourself to improve. All it means is that you're writing the work you think is important, the work that matters to you. It doesn't matter whether or not it has commercial potential. It matters that you care about it.

When you decide you want to be this kind of writer, you also have to figure out how you're going to do it. Above all else, you make sure you write, and that you've got as much time as possible to do it. It's not always easy, but there are a couple of ways to make sure you can write, and still have enough money to live.

One way is to find a job without much responsibility, where you can spend most of the hours you spend at the day-job writing. Raymond Carver, (ONLY ONE OF THE 20TH CENTURY'S GREATEST WRITERS, IN CASE YOU DIDN'T KNOW) spent many years as a hospital porter. He used to get all his work done in the first hour on the job, then spend the rest of it clacking away on his typewriter. (Or scribbling in his notepad, I don't know which method he used). That's RAYMOND CARVER, one of the greatest writers of OUR TIME. He wasn't above working in a hospital, and it will have given him a great deal of material to write about, too. Go figure.

Another way is to find a job well-paid enough to allow you to only work part time, so that you've got a couple of days a week to spend at your writing desk. Charles Ives, one of the forefathers of American composition, worked as an insurance clerk - AN INSURANCE CLERK - his entire life, and in the evenings composed some of the most groundbreaking works in the American musical canon. You didn't catch Charles Ives bitching, "Ohhh, I think I'll give up my day job as an insurance clerk to take a job writing advertising jingles, just so that I can truthfully say I'M A COMPOSER!" No! Charles Ives did not write music for money! He dutifully worked away in the evenings at his work, never allowing his lack of commercial or critical success to deter him from getting on.

In any case, an imaginary third option of making as much money as Dan Brown, and rolling around in bales of bank notes on a yacht, isn't really available to most of us. And if it were, would you really want to take it up? (Remember, when you give your answer, that you would have had to have written a book as bad as Angels and Demons). You'd basically be writing books for people who don't really like books very much. You think about that, and you get behind your desk, and stop worrying about being poor, and bloody well get on with it.

In American with Greenday Aaron Cometbus
Posted by S J Bradley at 01:24