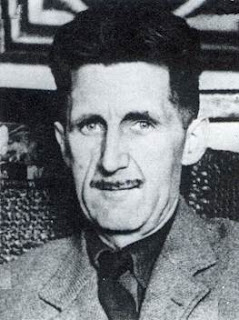 “Writing a book is a horrible, exhausting struggle, like a long bout of some painful illness. One would never undertake such a thing if one were not driven on by some demon whom one can neither resist nor understand.” - George Orwell

Born 1902 as Eric Blair, Orwell at the age of 30 disappointed his well-to-do parents by abandoning a well-paid career in the Imperial Police in Burma for the unstable life of a writer. His years in the Imperial Police, along with years spent in poverty in Paris and London, contributed to his strongly-held political convictions: “[They] increased my natural hatred of authority and made me for the first time fully aware of the existence of the working classes,” he was later to write. He became a committed democratic socialist.

Like many writers, he struggled in the actual act of writing, finding it uncomfortable and difficult. Yet he felt driven to continue his work, and was determined to develop political writing into an art. Pushed by his ideologies rather than a desire to create artistic works, political allegory and injustices created by existing systems were always a feature in his novels.

1984 was Orwell’s last book. He had seen much suffering in his life, living through both world wars and fighting in the Spanish civil war, and was opposed to any form of totalitarianism, whether it came from the Left or the Right. Though many read it as a warning of a possible future, Orwell maintained that he always intended it as a warning about the mechanisms used by the state to exert control over individuals.

In the novel, the state controls everything. Citizens are allocated their work, where they live; the state even controls the language they use - and they are manipulated into respecting and admiring their government, which has as its figurehead the shadowy Big Brother. Conflict in the novel comes from the desires of individuals against the state, and in particular in the love story between Winston and his girlfriend Julia. When they are together, the freedom of the human spirit prevails. This - love - is the one thing that Big Brother can’t control.

When their affair is discovered by the authorities, the two are separated and tortured into betraying one another. Their love has to be beaten out of them; it cannot be tolerated that they should have greater loyalty to someone other than Big Brother. “Never again will you be capable of love, or friendship, or joy of living, or laughter, or curiosity, or courage, or integrity…” Winston is told by a state enforcer, towards the end of the book. […] “… there will be no loyalty, except loyalty towards the party. There will be no love, except the love of Big Brother.”

He is told: “Always, at every moment, there will be the thrill of victory, the sensation of trampling on an enemy who is helpless. If you want a picture of the future, imagine a boot stamping on a human face - forever.”

The novel is one of the greatest of the 20th Century. It came out to almost universally positive reviews and is still much loved today. At the time of its publication, the Book of the Month club in America wanted Orwell to cut out large sections of the book, including its Newspeak appendix and the long section on Emmanuel Goldstein’s “The Theory and Practise of Oligarchical Collectivism”. Orwell refused. The publisher speculated that, by declining to make the cuts, he stood to lose a minimum of $40,000. But Orwell valued the political aspect of the work too highly to do any different; and the Book of the Month club decided to take on 1984 anyway. Orwell: “So that shows that virtue is its own reward, or that honesty is the best policy, I forget which.”