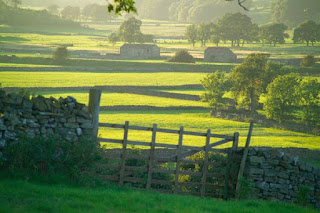 Having spent several days looking at writing retreats on the internet, I've come to a realisation: church-mouse poor writers like me don't get to go on writing retreats. Most of the ones I've seen look lovely, and fancy, and they all cost too much. Since I haven't yet written a best-seller, I've decided that the only thing for it is to have a go at organising a writing retreat myself. This way, I figure, it should be cheaper, and more fun.

Being of the self-organised mindset myself, the retreat will be co-operatively run. I'll take the responsibility for booking the bunk-house, and for giving everybody the information beforehand, but I won't be "in charge" once we're on the retreat. Everybody will take responsibility for their share of the cooking/housework rota, and for organising their own day. The retreat will probably be of particular interest to anybody who's used to being involved in organising things in a collective way. That's not to say you can't come if you've never done things in that way before - but if you haven't, you will need to be prepared for the fact that this retreat will demand more of you than a more expensive, professionally-organised retreat.

Everyone coming will need to commit to taking part in the housework and shared cooking rota, and to organising their own time once at the retreat. The idea is that there will be agreed 'quiet work times' during the day, and agreed 'social time'. Aside from sticking to those, you will be welcome to organise your time as you need to. The retreat will likely take place somewhere in the Yorkshire Dales National Park, so there will be plenty of scope for long walks and soaking up the beauty.

The group We'll need a group of between 6-8 writers to make it workable. This many people is a nice number for a cottage or bunkhouse, and should make the housework rota fair.

When & for how long For 2 weeks, some time in the 6-week summer holidays between 16th July and September 3rd 2012 (exact dates yet to be confirmed).

How it'll work Everyone will have their own working space, though some people may need to share a room. There will be agreed quiet 'working times' during the day, and agreed 'social times'. There won't be any exercises or work-sharing, unless that is what people want. Everyone will have to take part in the housework / cooking rota, with everybody doing at least one days' cooking and perhaps also half a days' tidying or food-shopping a week. This should give everybody at least 11 days' solid uninterrupted writing time during the retreat.

How much it'll cost The aim is to keep the price of accommodation under £300 for the fortnight (cheaper, if we can manage it). There will also be the price of ingredients for shared food (which will hopefully come in at under £100 per person for the whole fortnight), and the cost of getting there.

Conditions for coming You can come if you need a writing retreat. You must be committed to taking part in the cooking / house-work rota, and to having some say in how the retreat should work. This retreat will probably particularly appeal to people interested in organising things in a collective / DIY way.

How to express your interest If you're interested in coming along on this retreat, please either email me on s dot j dot bradley (at) hotmail dot com, or find me on twitter (via the tweet-deck link on the left hand side of the page).

The Heart of the Matter Graham Greene
Posted by S J Bradley at 02:28