If you're anything like me, you'll have spent the last few months since the election, living with a circling sensation of impending doom. If you're a writer or artist, or young and poor, or disabled, and can't help feeling that the Tories hate you on a very deep and personal level... you're right.

You don't need me to rehash all of the things the Government have been doing. The list of things they've done to make sure the poor and disadvantaged, and the young, stay in their 'place' and have no opportunity to rise above it, makes for pretty depressing reading. Slowly but surely, the Tories have been removing opportunities for a better life for our young. Making University more expensive - removing access to sixth form college - allowing corporations to employ people on 'zero hours' contracts, which leave them without workers' rights.

And you also don't need me to tell you, that the Government hate the creative arts too. High University fees dissuade students from choosing creative subjects; and the Education Secretary (The Education Secretary!) likes to go around telling people that children shouldn't focus on the arts at all - because doing so limits their career paths for years into the future. (What career path, by the way, Nicky Morgan? Aren't our young all either unemployed or working for Sports Direct on zero hours contracts?)

Little wonder that a Government obsessed by big business and exploitation of the lower orders, should think that the arts don't 'matter'. Their reason for not funding the arts often comes down to money: that the arts don't generate enough income for every pound spent, and they don't contribute enough to our country's growth. How typical of a Tory, to think that something that doesn't generate huge wads of cash can't possibly be worthwhile.

But, it seems to me that there's another reason why the Government hate the arts. Another reason that's less straightforward, and much more sinister.

Do you want to know what I think?

I think the Tories are frightened of the arts. Why?

Because artists (and I use 'artist' as a catch-all word that encompasses musicians, composers, writers, film directors, theatre makers, graphic novel artists, and anybody else I've forgotten) show people what the joy of life can be. The arts take us out of the misery of our zero-hours contracts, (or the misery of unemployment), and take us away for a few hours. The arts can transport us around the world: they show us other people, other places, other ways of being. The arts make us ask questions: they make us think. And there's nothing this Government is more frightened of than a general public who think, and ask questions.

There's nothing this Government would love more than for artists and writers all over the country, to throw up their hands and say, "Well ok, I give up." It wants to squeeze the will to live from us, just like it wants to squeeze the lifeblood out of the poor, the disabled, and the vulnerable. Don't let them do it. You have the tools to resist!

If you're young, and feeling trapped by high University fees, and the length of internships needed to get into any arts industry, let me tell you something. You don't need a degree to become a writer. I never studied writing at University, but I've got a book out, and have been shortlisted for a couple of national / international awards. Plenty of artists, writers, and actors, throughout the ages, have been self-taught. Chris Pratt is one extremely famous example; AL Kennedy, writer and winner of several international awards, is another. There are many others - I couldn't possibly list them all here.

If you are intimidated and afraid of the helplessness of the difficulty of trying to be an artist - maybe it all looks too difficult, and you don't know where to start - let me tell you, there are thousands of others like you. There is no need to wait. Don't worry about trying to find a way of generating income from your art, certainly not at first. Try to find a way to do it alongside whatever other income you can get. For the time being, your day job (or your JSA) is going to support whatever art you want to make.

Making art is one of the best ways you can resist the Government. They hate the arts, because they don't want us to be able to imagine a life outside of what we're assigned: a grind of struggling to get by on pennies, of blaming the other poor (the tropes of 'the undeserving immigrant' and 'the workshy benefits scrounger' are a couple of stereotypes they'd like us to believe in) for our problems. But by creating art, you can resist that.

During the 80s, (which was the last time the Tories were screwing our country over so comprehensively, by the way) there was an explosion in amazing, home-made art and music. Tiny record labels like 4AD and Two Tone were putting out politically motivated records that still stand the test of time. The band Crass were such a thorn to the government of the day, that questions were asked about them in Parliament. 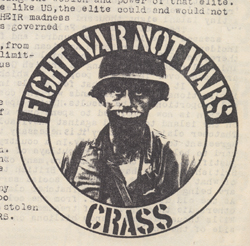 And one of the best things about art? It brings you into contact with other people doing the same sorts of things - musicians, film makers, writers. Art is a way of bringing communities together - another thing this Government doesn't want.

Yes, it's harder when you've got limited resources, but not impossible. Creative minds can always think of creative solutions. Can you make an album in your bedroom at home? Start a blog which you post from the nearest public library? Draw a comic on the kitchen table at home, and find a way to photocopy and distribute it? Get together with a few friends and start a magazine? Start a night class / short course at the nearest 6th form college to get access to the music studio / photography studio / screen printing facilities? Join the 1 in 12 club (other anarchist clubs are available) to get access to a library? Reframe your project so that it's smaller, cheaper, more manageable?

One of the greatest things about making art today, by contrast with the 80s, are the tools available. These days anybody can start a photography project, or a band, and get their work up onto Tumblr or Bandcamp. But, one thing that's also worth thinking about is: can you make your art available in your local community? Could you start a local arts' market? Start a regular, affordable film screening night in a community centre? Or somebody's house, if your local council have closed all the community centres near you?

One effect of the Government's work has been to deny access to the arts in our communities. People are too busy & ground down by the struggle of life to be able to go to the cinema, or to make long journeys to galleries and museums. What can you do to bring art into your town - into your local community centre - into your street? How can you use it to make connections with other artists and your neighbours?

Again, this is another thing the Government don't want. They'd much rather we were all holed up in our homes, watching Benefits Street and blaming a whole bunch of fictional 'others' for our problems. But you can use your art to make connections with others. I hope you'll believe me when I say that this will help others having the same struggles, and help you, too.

I hope this blog post has given you some inspiration and ideas for things that you can do. This is the second Tory government I've seen in my lifetime (I remember the last one, more's the pity), and I know that we have the tools and resources between us to resist them. Good luck, my pals, and tweet me / email me if it has given you the inspiration to work on a project of some kind. I would love to hear about it. Bon chance!