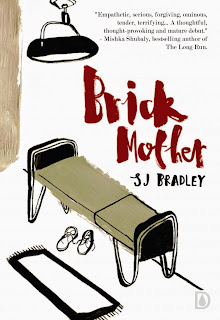 Last week, I was at Manchester's Anthony Burgess Foundation, at Dead Ink's new website launch. Their new initiative, Publishing The Underground, connects readers and authors by running on a subscription & membership model. You can become a Dead Ink member by pre-ordering one of the great books coming out this year, or by buying a Dead Ink tote bag or t-shirt. It's a pretty sweet way of running a modern publishing company, and you get to have a hardback book, from one of their exciting new authors, for £12 as well. What's not to like?

Here's the speech I gave at the launch.

"Many thanks to Nathan for inviting me to speak tonight.

My novel, Brick Mother, was published by Dead Ink Books last year as part of New Voices 2014. It has been described as 'a kitchen sink thriller', 'thought provoking and terrifying, a thrilling page turner' and 'one of the best novels ever written about work.' It was accepted for publication in June 2013, and was published a year later.

After being published, it was longlisted for the Guardian First Book Award, the Not the Booker Prize, and shortlisted for the Gladstone Writers in Residence Award. It was also, for one very exciting day, a number-one bestseller in the Amazon Literary Thriller subgenre.

Having my book published has allowed me to go 'out on the road' as a real author. I've been to book festivals, literary festivals, been a featured writer at live lit nights, and appeared at book groups where my novel has been discussed. I should stress that none of this would have been possible without Dead Ink.

My experience publishing with Dead Ink made a big difference to me. I didn't go to University to learn to write. A writer like me, completely self-taught, and without any access to editors or creative writing tutors, doesn't have any expert help to improve their work. Publishing with Dead Ink gave me the chance to work closely with Nathan, an experienced editor, who helped me improve my book. And in the run-up to the novel's publication, I also got to work closely with the graphic designer who made the book's cover, to say how I wanted the book to look. Many writers don't get the chance to be so intimately involved in a book's development, at every stage of the process, from start to finish. The experience was a very meaningful one, and one which may not have been possible with a larger publisher.

Tonight, you've heard three great new authors [Lochlan Bloom, Harry Gallon, and Wes Brown] read excerpts of their work. Well, big publishers take fewer and fewer risks all the time. You are not going to see a big publisher take a punt on new, great writers like these.

Independent publishing is important, because it dares to publish work nobody else dares to back. Work that is daring - work that breaks new ground. Work that is weird, and unconventional, and sometimes defiantly uncommercial. Independent presses blaze a trail that others later follow, and give authors that important first step in developing their work and getting it out into the world.

So, I hope you'll support this important work, and this new way of working for Dead Ink, by pre-ordering the books and becoming a Dead Ink member at tonight's event."

The Year of the Flood Margaret Attwood