"Alton Towers is the oldest theme park in the UK, situated on the border of the village of Alton in the middle of the Staffordshire countryside. The resort encompasses the park itself, a waterpark, two hotels, an “extraordinary” golf course and a range of peripheral attractions. At the centre of the complex stands the neglected remains of a once-magnificent stately home, which has fallen into disprepair even as the modern park has developed around it." [Liminal Resident website]. 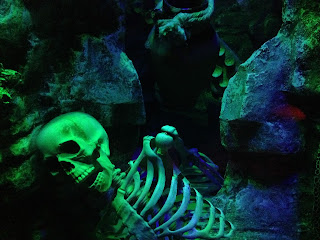 I recently spent several weird, and deeply enjoyable, days at Alton Towers as part of the Liminal Residency. It was a wonderful and extremely strange weekend, and it was great to spend time in the company of a bunch of extremely talented writers.


We stayed in the Alton Towers Hotel (where the lifts play music!) explored the original Towers in the rain, looked at starfish in the Aquarium (it was raining - the rollercoasters were closed) ate expensive, terrible food in a restaurant with FAKE CURTAINS. It was a brilliant weekend of oddness and beauty, and I'm incredibly grateful to have had the chance to go on it. Many thanks to Elly and Krishan for organising.

"I often say that I like to write about real things. I suppose by that I mean things that actually happened, stories that are little told, or that other people don’t think about or write about." You can read my interview about the experience here.

The writers who took part in the residency - Alison Powell, Gaynor Jones, Julia Deakin, Eloise CC Shepherd, Krishan Coupland, and Claire Fuller - have each contributed a story or poem inspired by the workshops and experiences of the weekend, It also features a story by me, but don't let that put you off. Pre-order your copy here.