Fictions of Every Kind: Cuts 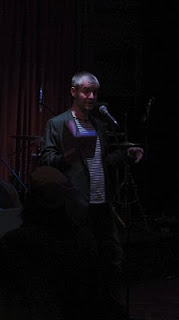 Michael Stewart reads from his novel, King Crow, at Fictions of Every Kind; Cuts

People in the DIY community, people who put on shows, often speak of the 'nervous hour'. It's the time of night between you setting everything up for your night, and people showing up to pay in on the door. It's an awful time of night, and my 'nervous hour' normally lasts from about 3pm in the afternoon til about 9 at night....

Enough about that, though. Let's have a post-mortem of last night's Fictions of Every Kind.

It was a marvellous night. Bloody marvellous. Michael Stewart read from his new novel King Crow, and he was followed by Noah Brown, who read a specially-written piece, perhaps best described as a gory revenge fantasy against the bankers. Each set was different and unique, and they made great guest speakers. We were very lucky to have them. 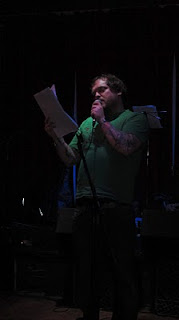 Noah Brown reads his specially-written piece about the 'big society'.

At the end of the night, we were treated to some absolutely marvellous and very danceable klezmer from the superb Maquipacuna. Here's a picture of them klezmer-ing it up. 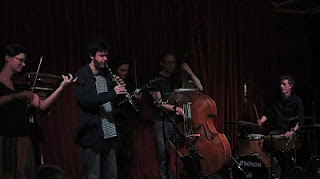