Fictions of Every Kind: Missing - two days after 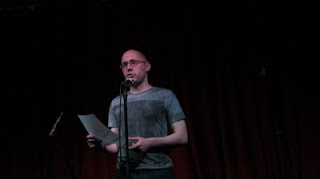 Gareth Durasow reading at Fictions of Every Kind: Missing

What a marvellous night we all had on Tuesday at the Library. My thanks go out to everyone who came out, making it such a success!

There were plenty of exciting newcomers to the open mic, and some brilliant contributions from our regulars. Many of the pieces were touching and thought-provoking. Approaches to the month's theme were diverse. The creativity in the air was palpable.... 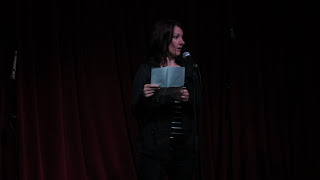 Catherine reads a piece on 'going missing' during the Open Mic

Our guest speakers were Gareth Durasow (pictured, above) and Nasser Hussain. We had been expecting Phil Kirby, but he was unable to make it at the very last minute. Gareth read from a set of poems, numbered 1 - 12, and the audience chose (by heckling) the order in which he should read them. It was funny and biting and inspirational, and we were really glad to have him. Nasser, an excellent addition to the bill, is a Canadian-born hip-hop influenced poet. His work riffed off and referenced Stevie Wonder and Run DMC, and his poems were read with fascinating rhythm. If you ever get the chance to see him perform, I really recommend that you go. 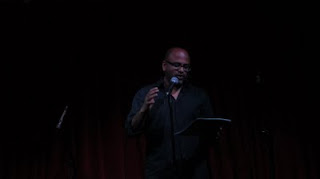 The night was closed by the marvellous 7 hertz, whose music perhaps can best be described as "improvised sound-paintings". Though it was late, and much beer had been drunk, the audience listened in a raptured silence, drawn in by the intertwining melodies and counterpoints. 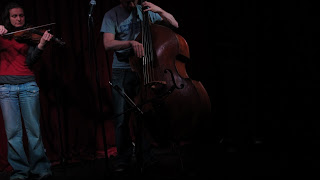 Thanks again to everyone who came out ... hope to see you at the next one!
Posted by S J Bradley at 11:31