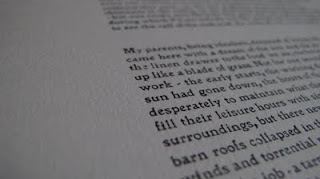 Last week, I finished letterpress printing my short story chapbook, 'A Stranger Came'. I wrote this story last year. It's a tale of isolation and betrayal, all set in the picturesque heart of the Yorkshire Dales.

It's hard to explain the beauty of letterpress printing without getting helplessly nerdy about it. Letterpress is an old and obselete technique for printing which involves setting metal type - in individual letters - into words and sentences, and then printing them with an old and dangerous press. Since starting to learn to typeset and print in November last year at The Print Project, Bradford, I have only come to love letterpress more and more, even though it is a frustrating, time-consuming and sometimes teeth-gnashing process, with no shortcuts.

A lot of people have asked me "why bother with letterpress, when you could use a computer?" The answer is that there's no comparison between the end results. If you hold something produced using letterpress in your hands, you feel the impression the type and text leave in the page; you can literally feel the hours of human labour that have gone into creating it. When you touch the page and the impressions, you know that this is something made by another human hand.

Letterpress isn't used for large-scale commercial printing any more, and is slowly dying out. The machines and typesets that produce it are no longer made, and the techniques kept alive by being passed on from enthusiast to enthusiast. Many commercial printers are closing their doors as their businesses become untenable. The typeset that I used for this short story came to me from one such printer, in Sheffield. The man who ran the business no longer needed any of his typesets, and ended up as good as giving them away.

After I'd set and printed the first page with my typeset, I noticed what an unusual font it was. It had an upwards sloping e, and looked somewhat old fashioned. I wondered what it was; I trawled font sites on the internet without success, and nobody I knew could identify it. In the end, someone at the Briar Press letterpress community told me what it was: Morris Gold, a font designed by William Morris in the 19th Century.

William Morris, an active member in the Arts & Crafts movement, was a successful furniture designer for most of his career. Late in life, he got interested in printing and started the Kelmscott Press. Many printing houses of the time were using compressed types, because it used less paper and saved money. But Morris' aim with the Kelmscott Press was to produce beautiful books at affordable prices, and he didn't want to follow their example. Keen to distinguish his press from other outfits, he designed a font of his own, basing it on an old Roman type. It was used to print the first few Kelmscott Press titles, and earned itself the nickname 'Morris Gold'. I couldn't believe that I'd ended up with a tray of it myself, and completely by accident!

I used the typeset to print the entirety of 'A Stranger Came', printing it paragraph by paragraph as there wasn't quite enough type to do a full page at a time. As I reached the end of the chapbook, I noticed how worn the type was becoming. The act of printing wears the type down at the edges, and causes it to become blunt and unreadable; and so, with regret, I think this particular typeset will have to go into retirement lest it becomes blunt entirely. All the same, I was glad to have been able to use it to letterpress print a full short story with its use. I like to think that William Morris would have been proud to see some of his type be used for this purpose in its last ever outing before retirement.
Posted by S J Bradley at 04:24