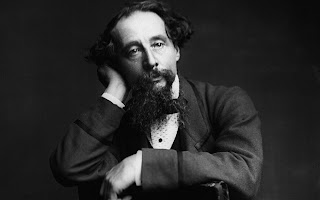 Charles Dickens enjoyed the sort of success in his own lifetime that would be the envy of many writers. Beginning his writing career at the age of 15 as a parliamentary reporter, Dickens went on to write social commentaries and serialised fictions that were hugely popular in his own lifetime. His works are still loved today, and seem to constantly be getting adapted for the telly.

Dickens' works are built upon themes of poverty and injustice. He grew up in a Britain where there was no welfare state, where orphans and the poor were sent to the workhouse to break rocks and unravel rope. Crime and illness were rife in the London slums; cholera and pickpocketing rocketed through the overcrowded housing like wildfire. As a young child, and even throughout adulthood, Dickens was given to wandering the streets of London at dawn, observing the lives that his contemporaries led.

The Dickens family fell upon hard times during Charles' childhood. His father, who was later portrayed as Mr Micawber in David Copperfield, had a period of struggling for work. The financial difficulties of the family saw Dickens' father and younger siblings being sent off to the debtors' prison at Marshalsea. The episode put an abrupt end to Charles' education. He was taken out of school and put to work in a bottling factory. That his schooling should come to such a sudden end left indelible marks on Dickens' character, and perhaps contributed to his wish to portray the plight of the poor to the chattering classes: he never forgot it. "...my early hopes of growing up to be a learned and distinguished man, crushed in my breast. The deep remembrance of the sense I had of being utterly neglected and hopeless; of the shame I felt in my position; of the misery it was to my young heart to believe that, day by day, what I had learns, and thought, and delighted in, and raised my fancy and my emulation up by, was passing away from me." He was later to use this experience to portray the hopeless situation of orphans Pip, in Great Expectations, and Oliver, in Oliver Twist.

Throughout life Dickens retained his strong social conscience. It informed his work from the popular 'London Sketches', short columns which he wrote for the paper as a young journalist, to his great novels. His work as a parliamentary reporter gave him access to knowledge about the terrible conditions in which child labourers worked, and he was also very aware of the plight of 'fallen women'. Despite the considerable commercial and critical success of his novels, Dickens never stopped with his political and activist work. He devoted considerable energy to setting up and running a rehabilitative home for women who had fallen into prostitution and petty crime, and was involved heavily in its running for at least ten years; and spent a couple of years donating anonymous articles to the radical newspaper The Examiner.

Two of his works were conceived with the express purpose of awakening peoples' awareness to the difficulties of the poor. A Christmas Carol, for which he had the idea in October 1843, was directly aimed at encouraging its readers to practical benevolence. Despite being less than two months from conception to publishing, the book was a massive critical and commercial success. Oliver Twist (1838), which begins with the birth of an illegitimate child to a woman who dies in childbirth, was written to awaken its readers to the realities of life for orphaned children, who lived their lives at the mercy of parish councils and workhouses. Unlike children with parents, there was little prospect of an orphaned child ever improving his lot through education (which had to be paid for), or through being indentured to an apprenticeship (which called for respectability and connections).

In later life Dickens appears to have devoted his work increasingly to political change. Little Dorrit and Bleak House both satirise social injustice and the irresponsibility which pervaded most of Britain's national life at the time; and Hard Times was a topical tome about profiteering: "My satire is against those who see figures and averages and nothing else - the representatives of the wickedest and most enormous vice of this time".

Most of all, though, Dickens' work was concerned with the little man: the guy who was poor & unlucky; the orphans who were born into hardship and cruelty; the families whose poor luck in work condemned them to the debtors' prison or the workhouse. "His goods are distrained, his children are crying with cold and hunger, and the very bed on which his sick wife is lying, is dragged from beneath her. What can he do? To whom is he to apply for relief?"

The Heart of the Matter Graham Greene
Posted by S J Bradley at 08:32