Fictions of every kind: the future! 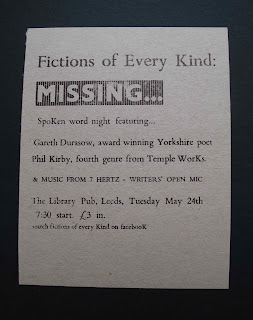 Last Monday, the Fictions of Every Kind collective got together in the pub to discuss future events for the rest of the year. Little of the conversation went over to 'business', naturally. We were in the presence of real ale, and so at several points the conversation veered off variously, into: the summer festival circuit; what it would have been like working in the same post office as Charles Bukowski; and whether or not you look for potential exits in case of zombie apocalypse in every new place you visit. Apparently I am the only one in the collective who doesn't look for zombie-proof exits everywhere she goes. Still, at least it means I won't have to live out my days terrified in the top floor of a shopping mall, while the undead shuffle around in front of the shop windows, their flesh dripping from their bones in synchronicity with the piped music.

During the course of the afternoon, talk turned to 'Fictions of Every Kind', and what gives our night its personality. At the time we were talking about the kind of invited speakers we like to have. Over the past few months we've had some great writers speaking. The performances have ranged from literary fiction to horror, and science fiction to hip-hop poetry. So far we've been able to welcome a diverse range of speakers to our night, without ever losing the personality and soul of what we do, and long may that continue.

For us, ownership is important. In a very real sense, the people who come to Fictions of Every Kind are what define it and give it its personality. With help from Sam Francis, I originally started Fictions... because I know that writing is a lonely business. It's easy to lose perspective on what you do, and to not know whether or not what you're doing is any good. With that in mind, I wanted to start a night where writers could meet other writers, and gain support and encouragement from one another.

The way that we do things is important too. Sam & I both have a background in the punk rock & DIY music scene in Leeds, and we were keen that Fictions... should have the same kind of ethos. Therefore, involvement in Fictions... isn't a route to 'bigger' things. The aim of the night is never going to be to help 'launch' writers, or to make money. Although writers who speak are welcome to sell and promote their books - hell, they have to, because we can't pay them a lot to appear - we want to promote the idea that all writers are equal. Whether you've sold a million books, or whether you have a stack of unpublished, unagented novels in your desk drawer, the struggles you face as a writer are the same. Writers of all persuasions have the same 'dark times', and we all ask ourselves the same questions: "Is anybody ever going to want to read this?"; "Is what I'm doing really any good?"; "Why have I spent six hours cleaning the house instead of sitting in front of my computer, looking at a blinking cursor and an accusingly blank Word document?"

So the aim of Fictions... is simple. It exists to bring writers and writers together; to give us support and encouragement, and inspiration to get us back to work again. A combination of conversation and performances serves to break writers out of the dark spiral of neurotically-driven writers' block we all sometimes get sucked into. Sometimes its hard to speak to people about what we do, and a lot of the regular Fictions... community have found it almost mind-blowing to be in a room full of other writers. At last, we can find our counterparts, the people who understand how difficult it can be to be a writer.

I'm glad to say that out of the afternoon's meeting came some very exciting ideas for the next few months. Until we've got everything planned and firmed up, I wouldn't like to go revealing anything for fear of the others attacking me with an axe. I will say, though, that I think the next few months are going to be fun. And that we hope to see you there....
Posted by S J Bradley at 03:36