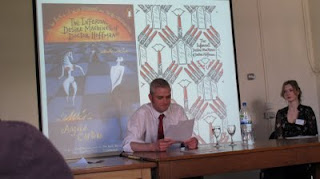 Last week, Dr Sam Francis put on a conference at the University of Leeds entitled Working through Psychoanalysis: Freud's Cultural Legacy. He and his colleague Dr Nicholas Ray were responsible for convening and calling the conference, so well done to them.

The conference was a two day mash-up of writers, thinkers, psychoanalysts and psychotherapists talking about Freud's legacy to the arts and culture. Everything from Tony Soprano's course of analysis in the HBO series The Sopranos, to viewing Facebook from a Freudian perspective, was discussed. The whole thing took place in the distinguished atmosphere of the University's English Department's buildings. (You cannot imagine how exciting this was for somebody who got their higher education at two former polytechnics).

On Saturday morning, Dr Sam spoke at the panel "Resisting and working through psychoanalysis in LIterary Fiction", chaired by Armela Panajoti from the University of Vlora in Albania. Dr Sam presented some of his work on JG Ballard, claiming that his paper was "cribbed from the book I've just finished writing" (The Psychological Fictions of JG Ballard, forthcoming from Continuum Books), and Naomi Booth presented a paper from her work about Angela Carter's The Infernal Desire Machines of Doctor Hoffman.

Both papers were really interesting - Dr Sam's in particular, made me want to go down to the library and take out everything JG Ballard has ever written. It was also interesting to think about Angela Carter's work through a Freudian lens. Booth said at one point that she felt that a table was needed, so integral and densely-woven were the allegories within the book. It was certainly interesting to hear Carter, one of the big feminist writers of the 20th century, discussed with reference to Freud.

I was left wondering afterwards how we as women writers/ thinkers / academics identify ourselves through this sort of lens. Somewhat a product of his time in many respects, Freud isn't always noted for his enlightened attitude towards women. Despite treating many women for 'hysteria', Freud seemed to view women as fundamentally being neurotic, and often complained even in his written work that he didn't understand the female psyche. (Men today often make the same sort of complaint). I wondered whether there was room for a feminist discourse around the idea that the beginnings of psychoanalysis was rooted in a very male discourse, and whether there's an allegory between this and any themes in Carter's work about women trying to find a voice in a 'male' world. It certainly left me with a lot to think about, and also made my 'to-read' list instantly ten or eleventy books longer.