Fictions of Every Kind: procrastination 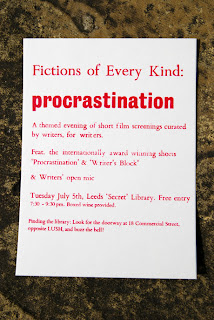 Flier typeset and designed by Sarah Bradley. Photo by Nick of The Print Project.

We all do it. Don't pretend you don't. Whether it's cleaning the house or perfecting your golf swing, every single writer has his or her very own perfected procrastination method. A writer can sit down in front of her computer, only to find three hours later that the house is mysteriously meticulously clean, the cat bathed and brushed, the windows washed inside and out, and there's a quiche baking in the oven. How did that happen? The sink and the bath are gleaming, and she still hasn't written a single word.

The theme of July's Fictions of Every Kind will be 'Procrastination'. It's a theme that strikes a deep chord in the heart of every writer. It's unlikely anybody will learn anything new by attending. Most writers could probably write a book on the subject, if only they could get started. (Curiously, the most popular 'words of encouragement' card is the one that reads, "Bloody get on with it". Now what does that tell us?)

Fictions of Every Kind: Procrastination is on Tuesday July 5th from 7.30pm - 9.30pm in The Leeds Library, a 'secret library' on 18 Commercial Street, accessible by a recessed doorway across the road from LUSH. Instead of invited speakers, we'll be showing a selection of short films around the theme. As usual, there will be chance for writers to share their work at an open mic. Entry is free, and there will be boxed wine and popcorn - donations towards the costs of these will be welcomed!

We have some rather marvellous films to show in a range of styles: animation, documentary, comedy, and the abstract, all around the theme. As usual it promises to be a thought-provoking evening, and we look forward to meeting you there!

Fictions of Every Kind on facebook
Posted by S J Bradley at 04:44